The current Government drive to find renewable sources of energy has resulted in the rapid development of wind farms. Wind energy is likely to be a significant contributor to the Government’s renewable aspirations. But there is a downside: by virtue of the size of modern wind turbines and their location on the landscape, they have the potential to obstruct radio paths and also act as massive reflectors of radio energy. The effect has been described as being similar to a dance hall mirrorball, although the number of reflecting surfaces on a wind turbine are fewer.

Because of their large moving surfaces their effect is difficult to predict and constantly changing. Although wind turbines have a detrimental effect on all radio communications, their effect on mobile systems, such as cell phones, will not be as great as on fixed systems. Mobile systems are designed to operate in a rapidly changing radio propagation environment, but radio communication systems designed to interact with mainly fixed infrastructure are vulnerable to the detrimental effects of wind turbines. The systems most affected are those which rely on a stable propagation environment such as aircraft radars, television and fixed data systems.

Although turbine blades are not of metallic construction they can nevertheless reflect and diffract radio waves. The anti-icing, static and lightning protection schemes built into turbine blades can further enhance their radio reflective properties.

The interference effects of wind turbines on radar systems and analogue terrestrial TV systems have been investigated extensively. Ofcom, and its predecessor, the Radiocommunications Agency undertook some theoretical work on the potential for wind turbines to interfere with microwave fixed links but, because of the relatively small size of the market for utility telemetry radio systems, less research has been directed at this service.

JRC has been assessing the potential for wind farms to cause interference to gas and electricity industry microwave and Ultra High Frequency (UHF) telemetry links for several years. We have co-ordinated many thousands of wind farm applications in the last few years. Telemetry links in most cases are an integral part of the Supervisory Control And Data Acquisition (SCADA) systems used by utilities for monitoring and controlling their networks - including the infrastructure connecting the wind farms to the grid. Interruption to the reliable operation of these links compromises the integrity of the UK energy generation, transmission and distribution systems.

In 2002, the then Radiocommunications Agency (now the Office of Communications) issued a paper that attempted to model the environment with respect to line-of-sight (LOS) microwave (above 3 GHz) links and wind farms. We use a modified version of that method for coordinating microwave links but the method used by JRC for telemetry systems is a custom adaptation of this LOS Microwave method to take into account the added complexity of non-LOS paths and the use of much lower frequencies than were considered in the Radiocommunications Agency paper.

These UHF telemetry links are normally planned on the basis of approximately 99.9% availability. UHF frequencies are particularly suited to this application as a single hop can provide a reliable link over a 40 km path, and it is not necessary to have a line-of-sight path from transmitter to receiver.

The ability of UHF telemetry systems to operate over obstructed paths is the feature that creates the greatest potential for incompatibility with wind turbines.

Because wind turbines frequently occupy the higher ground and protrude above the landscape they act as radio reflectors so that the reflected path of one of these links could, via the wind turbine, be much superior to the intended path over the landscape. The reflected signal can be strong enough to deteriorate the wanted signal. 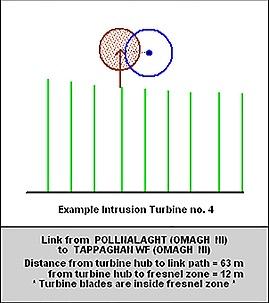 So that JRC can properly assess the potential effect of a wind farm on existing telemetry links it was necessary to develop a methodology that, as accurately as possible, allows us to model the situation. It is desirable that the model is as accurate as possible as there is a lot of investment on both sides and sloppy co-ordination can waste a lot of everyone's time, effort and money. A rigorous science-based approach to the subject is essential.